We have nine performances on the Mainstage – all for you to enjoy from the comfort of your own couch. (You can even bring snacks!) . Please remember to give a big thank you to all of the sponsors and member donors who helped bring us all together this week!

In some rare instances, our YouTube videos may not be visible on some computers. Sadly, this may be due to restrictions set by your network administrator or even your mail client provider. We know how frustrating this can be (our web admin has the same problem!) but we are unable to help you from our end. You may have to find an alternate device, DNS settings, internet connection, or a technician with more capacity to assist if you find yourself in these shoes. Please test your connection in advance!

Grab your FREE Weekend Pass now, then kick back with your favorite snacks and beverages for a show you don’t want to miss. Throughout the weekend you can join our featured Workshops and catch our Virtual Open Mic. 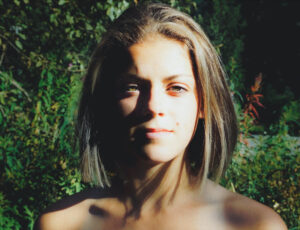 Ava Earl is a prolific young singer-songwriter from the small mountain town of Girdwood, Alaska. Known for her intricate fingerpicking and graceful melodies, Ava’s music reflects the landscape she’s grown up in — open, raw, beautiful.

At just 17 years old, she has written and co-produced three full-length albums. “Am I Me Yet?” is her latest work, released in July 2018. The collection of 15 songs features Ava on guitar and vocals, Andy Mullen on guitar and bass, and Anna Tivel on violin. The album was recorded at The Hallowed Halls studio in Portland, Oregon, and was engineered by Hawkins Wright who also co-produced the album.

An engaging performer, Ava thrives in a live concert setting, drawing audiences in with her music and stories. She’s as comfortable performing in large auditoriums as she is on festival stages and in listening room showcases. Highlight performances over the years include opening for Maggie Rogers (Nov 2017); playing with Parlor in the Round (Jan 2020, Mar 2018); performing at Salmonfest (Aug 2016, 2017, 2018, 2019); opening for Rhett Miller (Sep 2018); and opening for Tim Easton (Mar 2019).

Ava traveled to Nashville in February 2020 to record a new album. It is her first project with full arrangements and is being produced by JT Nero of the Birds of Chicago. The album release date is ever-nearing. Check back for updates! 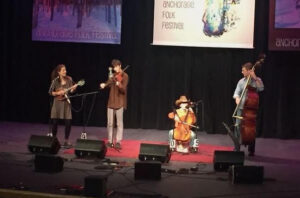 Their last names are Goodman and Allwright, hence the name The AllGood Family Band!  They’ve come a long way since their first festival in 2012, when Ezzy was 4 and played the smallest cello that has ever graced the Wendy Williamson stage.  The boys have been jamming together since before Ezzy could talk, but was big enough to toot a harmonica and simultaneously strum the ukulele in time to Ry on the fiddle.   Before Covid, the AllGood Family Band was doing regular gigs at Organic Oasis, and other venues like events at the Eagle River Nature center.

Lilly teaches middle school science, math, and music at Anchorage StrEaM Academy, while Michael is a leadership coach.  Ry is a mountain biker and competitive cross-country skier, and Ezzy recently had his debut at Anchorage Community Theater in an on-line musical.  Both boys go to Steller Secondary School in Anchorage. Their performance for you today includes an eclectic mixture of originals and original versions of old songs.  They hope you roll back your rugs and dance. 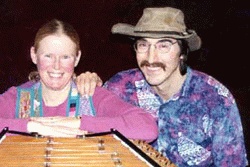 Jim and Denise have produced 4 CDs of hammered dulcimer music: 3 as a duo and one with Jubilee.  Their most recent recording “Laptop” features Irish music performed on concertina.  Though they have retired from the busking scene, Denise and Jim spent many summers playing together at Anchorage’s downtown Saturday Market, where they enjoyed engaging with tourists and selling CDs.

More recently they have played many private parties, weddings, coffee houses, restaurants and various eccentric venues.  Up until the advent Covid-19 they hosted a weekly Irish music session every Thursday night at McGinley’s Pub.

Jim, as a juggler, has opened for several nationally acclaimed acts.  He has taught music and juggling at various camps, and schools. He won the Anchorage Folk Festival Banjo Contest in 2017.  He has performed across Alaska, in Canada, California, New York, & Oregon. He gives private guitar, mandolin, banjo, bass and juggling lessons in Anchorage. They both currently play in Jubilee, The Empty Nesters, and Crooked Road. 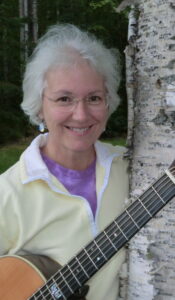 You never know quite what to expect from singer-songwriter Robin Hopper…..  One moment, you’ll be laughing as she delves into the  hilarious aspects of the human condition, and in the next, you’ll find yourself reaching for your kleenex as she tugs at your heartstrings.

Robin is also a decorated songwriter; winning Top Five Finalist honors four times in Alaska Public Radio Network’s Alaska Song of the Year Contest, and being named as the Contest’s Overall Winner in 2003.  You’ll find her at Alaskan festivals and concert series, as well as shows in New York and Arizona, both as a main-stage performer, and workshop presenter.  She has recorded 5 CDs, and her music is available on CDBaby.com and iTunes. 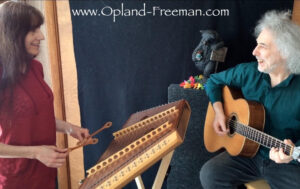 Tania Opland and Mike Freeman have  been touring the world together for nearly 30 years with a unique and eclectic mix of multicultural music and song on more instruments than any sane duo would travel with: hammered dulcimer, guitar, recorders, cittern, violin, ocarina, hurdy-gurdy, percussion… Our live shows have featured traditional and contemporary material as well as originals, presented with wit and style.

2020 made us re-focus. We’ve been doing home videos and live-stream performances to share free of charge with the hunkered world while we wait for reality to reach some new equilibrium.

Eight CDs and two songbooks are available from our web page at Opland-Freeman.com

The Forest That Never Sleeps 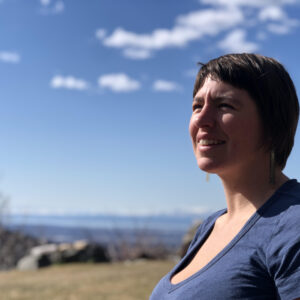 The Forest That Never Sleeps is Anchorage-based multi instrumentalist and singer-songwriter Kat Moore. From rollicking honky-tonk piano to sweeping, cinematic ballads, The Forest That Never Sleeps takes listeners through a gamut of emotions. Inspired by the beauty of the Alaskan landscape and the vibrant Anchorage community, Kat shares songs that bring listeners together and inspire wonder for the human experience.

Whether sharing the stage with The Super Saturated Sugar Strings, Lateral Lines, Sfyria, or as herself, one thing can be said for sure: The Forest That Never Sleeps LOVES to make music and she’s delighted to be a part of Anchorage Folk Festival 2021! 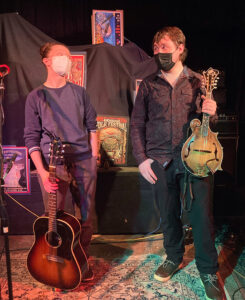 2 of 5 of the Tanana Rafters- Jamie Whiteman and Harrison Jennings debut a couple new songs in their covid-safe set alongside some old favorites. The full band is currently working on planning the recording of their next album, so follow them on IG or Facebook to stay tuned!

Based out of Anchorage, Alaska, this award winning bluesy folk-rock band has really gained ground since their formation in November of 2013. Carrying their roots in folk, country, blues, and bluegrass with them, they’ve traveled all over the last frontier and beyond, riling crowds of dancers and stilling hearts. 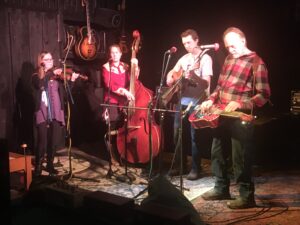 The Booth Family Band converges again! This bubble of extended family members has been tickling strings at the Anchorage Folk Festival as long as we can remember, and this year is no exception. Led by brother Danny on guitar, Danny’s wife Amanda on fiddle, sister Mandy on bass, and father Greg on dobro, this family band is intent on passing the musical torch to the next generation – Amanda teaches violin to Mandy’s two kids as well as her own, so maybe next years set will include three-generation version of Twinkle Twinkle! 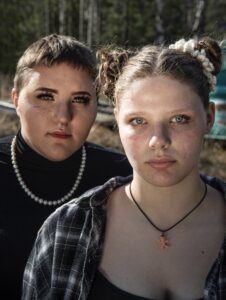 Charlotte and Clotilde Severin started to play music together when they were 15 and 11 years old, respectively, beginning their public performance career at the Under-21 open Mic held at Middle Way Café in Anchorage. They grew up with two very creative and artistic parents, their mom being a writer for numerous publications such as the Anchorage Daily News and Alaska Home Magazine, and their dad being a musician and the owner of Anchorage recording studio known as Studio 2200. Charlotte began playing guitar at age 10, finally performing at her first open mic at age 12, with her sister following close behind.

Since they began singing together, they have rarely sung apart, with the description “Sister Harmonies” following them wherever they played. Over the years the duo turned into a trio when their father Martin Severin joined them to play the bass. They also gave the band the name Lucky Spider, and began to play at festivals and venues around Alaska, regularly including the Anchorage Folk Fest, Salmonfest, and the Girdwood Forest Festival.

Now, 19-year-old Charlotte is attending school at Cornish College of the Arts in Seattle studying illustration, and Clotilde is getting through High school while also juggling daily dance classes at Alaska Dance Theatre. They were given the opportunity to end a year-long hiatus by performing at Folk Fest 2021, which they are extremely honored to be a part of. They hope to see you there (virtually, of course).